Stonewall’s Grave and Other Interesting Things 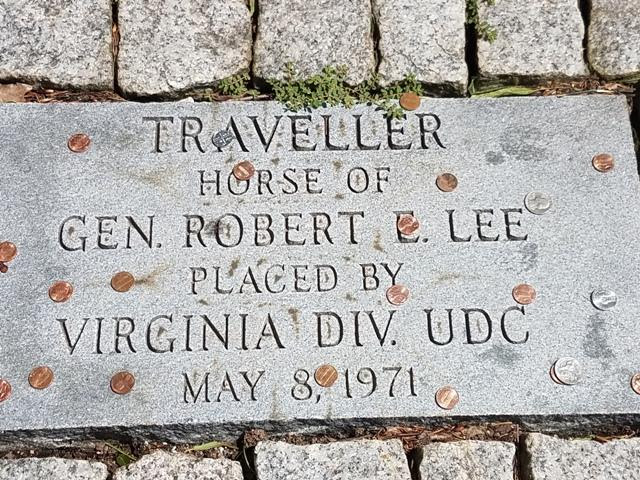 On July 29th of this year, Mrs. Marilyn and I celebrated our 44th wedding anniversary.

Well, we didn’t exactly celebrate it on the very day.  But a couple of days later we took off on a very special trip to the little town of Lexington, Virginia.
Lexington is an old town with a lot of history.  It was founded during the War of Independence and in fact was named after Lexington, Massachusetts, where the first shots of the war were fired by the Minute Men. Though it’s a very small town, Lexington has much to offer visitors. There are two famous colleges there, and in fact, they sit right next to each other.  And those two colleges are connected with the names of two of my personal heroes.
The first college is Virginia Military Institute. This old school once had a professor named Thomas Jonathan Jackson.  Jackson left the college as the head of a troop of soldiers to defend Virginia when the Union army invaded in 1861.
It wasn’t long after that he fought in the Battle of Bull Run, where he earned the nickname that would follow him throughout his life and through American history for generations-Stonewall Jackson.
Jackson was a very godly Christian. In addition to being active in the local Presbyterian church, he spent his own money to establish a Sunday School in which he taught slaves and free blacks how to read and understand the Bible. Even when he was away at war, he sent money home to his pastor for use in his Sunday School.  When he wrote letters home, he never mentioned the brilliant leadership that he displayed in winning battle after battle over Yankee armies much larger than his own.  Instead, he asked how his Sunday school pupils were getting along.
When Stonewall was accidentally killed by his own men during the Battle of Chancellorsville, his body was shipped home and he was buried in Lexington.
Mrs. Marilyn and I had long wanted to visit his grave and the house in which he had lived while teaching at VMI. (Oh, by the way-I’ve recorded a great biography of Stonewallfor the Uncle Rick Audio Book Club.)
Washington and Lee University is the next door neighbor to VMI.  And there another of my heroes is buried.  He is General Robert E. Lee.  The Club has a book about his life also.
After the South lost the war, General Lee received many offers of jobs.  He had to have a way of earning a living now that there was no more Confederate army, but none of the job offers seemed to be right for him.  After several months, he received a letter from the board of Washington College in Lexington.  They wanted him to come and be the President of the college.  Seeing a chance to help train leadership for the rebuilding of the South after the ravages of war, General Lee and his wife accepted the offer and moved to Lexington.
The General only lived five years after he began his work at Washington College.  During this time, he was admired throughout the South and the North as well because of his achievements in war and peace, and especially because of the high moral character he had always displayed.
When he died, he was buried in the chapel he had ordered to be built on the campus. When his old war horse, Traveler, died he was buried nearby. So Mrs. Marilyn and I had several graves to visit in Lexington.  Stonewall is not buried at VMI, but a few blocks away in Stonewall Cemetery. His horse, Little Sorrel, was stuffed after she died and now stands in the VMI museum. During our cemetery visit, we also saw the graves of several other Confederate soldiers and some Revolutionary Soldiers as well. It is a lovely place, with gravestones old and new.
Stonewall’s grave is underneath a large statue of himself.  By his side rest his wife, daughter, and several other family members.  The cemetery is shaded by many pretty trees, some of them so large that we know they were there when the great General was buried.
We toured the house in which Stonewall and his wife, Anna had lived.  It was the only house he ever owned.  Some of the furniture we saw was the very furniture the Jacksons had owned and used.  You can imagine how exciting it was to walk on the very floors on which the great Stonewall once walked. We couldn’t tour General Lee’s house because it is still used as the college president’s home and so it is occupied.  Traveler’s stable is now the garage.  Passersby on the sidewalk can see Traveler’s stall inside.
We made the hour-and-a-half drive from our home to Lexington on Monday afternoon and drove home Tuesday afternoon.  As we said goodbye to the quiet little town nestled among the beautiful Blue Ridge Mountains, we both hoped that we would someday return.  And we wondered why we hadn’t visited that lovely place much sooner.