Samuel Chase – Signer of the Declaration of Independence 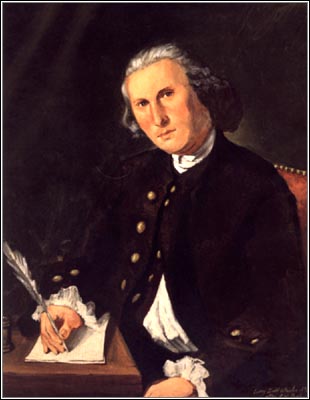 Samuel Chase, of Maryland, signed the Declaration of Independence and later served as a member of the United States Supreme Court.  A great proponent of the rule of law, Chase’s character is well illustrated in a story from the year 1974.
There had been a riot in which some men were tarred and feathered.  Two leaders of the riot had been charged with the crime and were to be tried in court.  But the two refused to post bond to assure their appearance on trial day.  So, it was ordered that they should be kept in jail until their day in court.
But an angry group of their followers intimidated the sheriff into hesitating to carry out the order.  It appeared that the rioters were prepared to use violence in preventing their leaders from going to jail.  Then Samuel Chase stepped forward.
Chase asked the Sheriff to swear him in as an officer of the law.  He would take responsibility for moving the accused men to jail himself, he said.  Another lawyer protested that the mob would attack Chase if he tried it.  Chase’s reply showed what he was made of.  He replied that, “…the life of one man is of little consequence compared to the prostration of the laws of the land—with the blessing of God, I will do my duty, be the consequences what they may.”  Someone was so impressed with the reply that the bond money for the two defendants was quickly offered.
[custom_frame_left] [/custom_frame_left] Samuel Chase’s long and accomplished life is worthwhile reading.  You’ll find the chapter about him in For You They Signed an inspiration for you and your children.