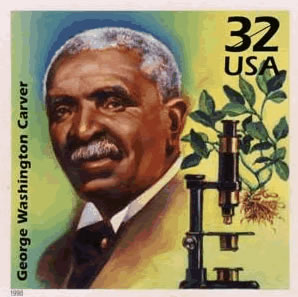 If ever there was a humble hero, such was George Washington Carver.  Carver was born a slave near Diamond, Missouri during the Civil War.  His mother was stolen from her owner, Moses Carver.  Although the baby George was taken as well, he was soon found and reclaimed.  He never saw his mother again.

George was raised as a son by the Carvers.  His foster mother, referred to by him as “Aunt Susan” Carver taught him the basics of reading and writing.  His consuming interest in plants led him into a deep informal study of botany.  Neighbors, hearing of his amazing ability would bring him their sick plants for help.  He became known in the community as the “plant doctor.”

But educational opportunities were few for black children at that time, so young George’s thirst for knowledge led him to walk ten miles to Neosho where there was a school for former slave children.  There he met a kind lady named Aunt Mariah Watkins.  Mariah was a former slave herself.  She took George into her home and taught him to cook, clean and do laundry.  He would later use those humble skills to support himself as he struggled through his education.  She also told him his name was George Carver, not “Carver’s George” as he had previously called himself.  “You must learn all you can, then go back out into the world and give your learning back to the people,” she told him.  George soon grew to love Aunt Mariah and always spoke with appreciation of her support for him and the useful skills she gave him in her home.

At thirteen, George went to live with a foster family in Fort Scott, Kansas.  His intention was to attend an academy there.  But he witnessed the murder of a black man by a mob of whites and soon fled the town.  After attending a series of schools and considerable study on his own,  he finally earned his diploma at Minneapolis High School in Minneapolis, Kansas.  He applied at several colleges before he was finally accepted to one in Highland, Kansas.  But when he arrived and they saw that he was a Negro, he was refused admission.  Finally, in 1890 at the approximate age of twenty-four, Carver started studying piano and art as Simpson College in Iowa.  His art teacher noticed his skill in painting plants and flowers and encouraged him to take up the study of botany, so he began his studies at Iowa State Agricultural College in Ames Iowa in 1891.  He was the first black student at Iowa State and would stay on as the first black faculty member.

More college followed and George did research at the Iowa Experiment Station, where his work in plant pathology and mycology first brought him national reknown as a botanist. In 1896, Carver accepted an offer from Booker T. Washington to head the Agriculture Department at the new Tuskeegee Institute, now Tuskeegee University.  In his 47 years there, Dr. Carver cemented his reputation as one of the premier botanical scientists of the world.  The soil of the South had been depleted by generations of cotton farming, and the boll weevil was spreading across the region and threatening to make cotton growing a near impossibility.  So Carver went to work and developed new and unheard-of uses for such crops as peanuts and sweet potatoes, plants which enriched the soil instead of depleting it.  He also introduced methods of crop rotation and taught generations of black students techniqes for farming for self-sufficiency.

Ever the servant of the public, Carver designed a mobile classroom called the Jesup wagon to take his teaching out to the local farmers of both races.  Though by now a world-famous scientist, Carver usually dressed in ragged clothes and spent most of his time working.  When he was not teaching his students, he was to be found in his workshop, nicknamed by him “God’s little workshop,” busily doing plant experiemnts.

Although often subjected to abuse because of his race and his impoverished appearance, George Washington Carver’s true humility kept him from becoming bitter or vengeful.  He nearly always declined patents on his discoveries, saying, “God gave them to me.  How can I sell them to someone else?”

Dr. Carver’s long and productive life has been an inspiration to generations of people of all races.  Besides his profound contribution to agriculture and race relations, his humble spirit and deep desire to serve God and man stand today as an example of a worthy Christian.