Hand of Providence at Dorchester Heights 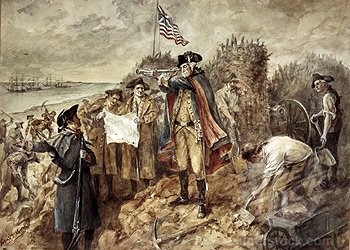 Hand of Providence at Dorchester Heights

a history story with uncle rick

On the night of March 4, the batteries opened up again. While they distracted the enemy, 2,000 American troops marched up Dorchester Heights hauling cannons and equipment.

They placed hay bales beside their path on the side toward the British to muffle the sound of their movements. All night long, patriots hauled cannons and built fortifications.

General Washington was there, encouraging his men and reminding them that March 5 was the sixth anniversary of the Boston Massacre. It was foggy down at the foot of the hill, but clear as a bell on the top of the hill. By 4 a.m. they had built solid fortifications, including rock-filled barrels that could be rolled down the hill on attackers.

When the sky grew light on March 5, General Howe looked in amazement at the fortifications on the heights and exclaimed, “The rebels have done more in one night than my whole army would have done in a month.”

Washington knew that the British had to either take the heights or leave Boston. Admiral Shuldham, commander of the British fleet, told Howe that he would have to withdraw his ships
from Boston Harbor unless the American works were taken, so General Howe determined to attack Dorchester Heights.

He put together a plan to move 2,400 men- under cover of darkness- to set up the assault. But Washington got word of his intentions and moved more of his troops to the hilltop, until he had a force of 6,000 in place.

Howe’s plans for an attack were foiled by a sudden severe storm. That night a “natural disaster” occurred in favor of the American troops. A terrible storm blew up such as no one had seen. It
blew the British ships into disarray and broke their masts.

In the morning, the general saw his ships wrecked and knew by the time he got things repaired the Americans would have a real advantage.

Rev. William Gordon, a local preacher, later said, “When I heard in the night how amazingly strong the wind blew, I pleased myself with the reflection that the Lord might be working delivery for us and thus prevent the diffusion of human blood. It proved to be so.”

Morning dawned on the following day and showed that the Americans had not let the storm delay them. They had built their fortifications higher and stronger during the storm. Now the redoubt was too strong to be taken. There was nothing for the British to do but abandon Boston. Without the shedding of a single drop of blood, the British quickly withdrew their 10,000 soldiers from the city of Boston on March 17, 1776. The victory at Dorchester Heights gave great confidence to the Americans!

The British threatened to burn the town if they were fired upon as they departed. Washington’s men were not all pleased at letting the redcoats go without some punishment, but the general was not willing to cause the destruction of so much private property as would go up in flames. Boat after boat splashed its way from the wharf to the waiting ships, and the redcoat soldiers took their last looks at the city they had dominated for so long.

The people of Boston breathed a heartfelt sigh of relief at the departure of the British soldiers. They had their town back once again.