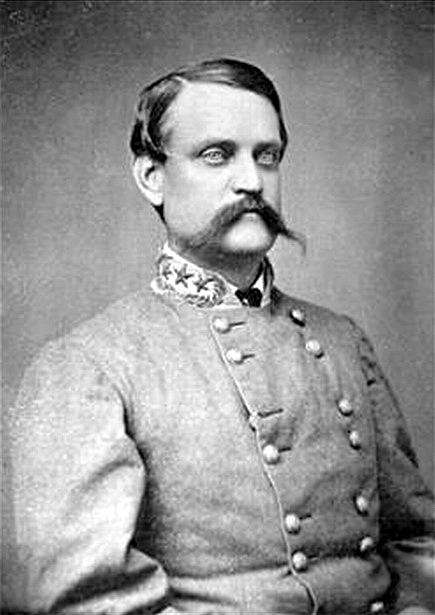 It was June, 1863 and the Civil War was going badly for the Confederacy in Tennessee.  Southern General Braxton Bragg found his army threatened by the much larger northern Army of the Cumberland under General Rosecrans.  The situation called for bold measures to draw off some of Rosecrans’ troops and create diversions that would divide his forces. It called for a bold commander.

Bragg called on Col. John Hunt Morgan for help.  Morgan was known as a bold and innovative cavalry commander whose men followed him with implicit faith and loyalty.  His orders were to ride through Tennessee and Kentucky, attacking smaller bodies of Federal troops, cutting communication lines, seizing supplies and horses, and generally creating havoc and confusion for the Yankee army.  Hopefully, the ultimate result would be a serious weakening of Rosecrans’ ability to concentrate his forces against Bragg. On June 11, Hunt rode out of Sparta, Tennessee and began harrassing the rear of the Federal army.  OnJune 23, Rosecrans moved against Bragg and Hunt led his 4,000 men into Kentucky to draw off as much Federal power as possible.  His men cut telegraph lines, captured hundreds of Yankee soldiers and badly-needed replacement horses and supplies.  Then, without the approval of Bragg, Hunt crossed the Ohio River and took the war to the Yankees in Indiana and Ohio.

Hunt’s Raid, as it was to be called in the history books, coincided in timing with General Robert E. Lee’s invasion of Pennsylvania which would culminate in the great Battle of  Gettysburg, but there was no connection between the two events.  Hunt’s force took a brutal beating during the campaign and in fact was reduced to 4oo men when Hunt was finally captured trying to cross the Ohio into West Virginia.  But his raid had brought results.

Col. Basil Duke later wrote, “The objects of the raid were accomplished. General Bragg’s retreat was unmolested by any flanking forces of the enemy, and I think that military men, who will review all the facts, will pronounce that this expedition delayed for weeks the fall of East Tennessee, and prevented the timely reinforcement of Rosecrans by troops that would otherwise have participated in the Battle of Chickamauga.”

Morgan and his men had disrupted railroads at over 60 points, diverted tens of thousands of Northern troops from other objectives, seized many thousands of dollars’ worth of food and other supplies and captured around 6,000 Yankee soldiers and militia members.  He had spread terror throughout Indiana and Ohio, causing those states to react with substantial defensive measures.  Ohio alone called up 587 companies of local militia.

Morgan and his depleted force were captured on July 26 and sent to the Ohio Penitentiary.  But on November he and six officers escaped by tunneling out of their cell and scaling the walls.  Morgan and four of his fellow escapees were successful in evading the Yankees and made their way safely back to the South.

More fascinating information about John Hunt Morgan is contained in Portraits of Integrity, a choice inside the Uncle Rick Audio Book Club. Have you subscribed yet?