Who was John Peter Gabriel Muhlenberg? 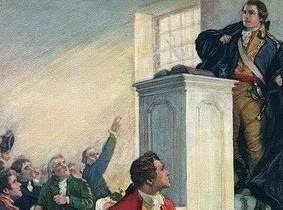 Who was John Peter Gabriel Muhlenberg?

John Peter Gabriel Muhlenberg was a Lutheran pastor when the Revolutionary War began.

He had much earlier made up his mind that if war came, he would throw in his lot with the Americans over the British.

On the Sunday of Muhlenberg’s last sermon,
he chose Ecclesiastes 3 as his text.

He concluded his sermon by reading verse 8:
“A time to love and a time to hate; a time
of war and a time of peace.”

Briefly, he finished by commenting that
“now is not a time of peace, but a time of war.” Then he swept his black clerical robe to reveal the uniform of a colonel in the Continental army.

He then stepped to the back of the church and began to sign up volunteers from among the men of his church as recruits for the American army.

A day or two later, he marched away,
leading 300 men to war.

They became the 8th Virginia Regiment.